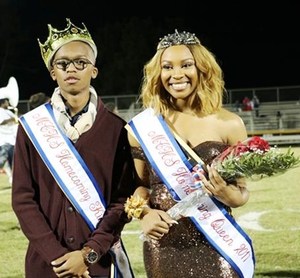 MCHS Homecoming Queen is Aniya Jackson and the MCHS Homecoming King is Tyke De’Williams.
On October 23, during the halftime show at the MCHS Homecoming Game, the MCHS Homecoming Queen and King were announced.
The 2017 Mitchell County High School Homecoming Queen is Miss Aniya Jackson. She is the daughter of Mr. Deddrick Jackson and Mrs. Genise Jackson. Aniya was escorted by her father Mr. Deddrick Jackson. Aniya is a member of the MCHS cheerleading squad, praise dance team at Open Door Church of Praise, and a member of the MCHS Cheer Competition Squad. Aniya is also a member of the CNA program at Mitchell County High School. Her future plans are to attend Clark Atlanta University or Georgia State University and major in chemistry and later become a pediatrician.
The 2017 Mitchell County High School Homecoming King is Mr. Tyke De’Williams. He is the son of Ms. Courtney L. Williams and the Godson of Mr. Venterra Pollard. Tyke was escorted by his mother Courtney Williams and Mr. Pollard. Tyke is a member of the Mitchell County High School FFA and attends St. Mary Missionary Baptist Church. This school year he is interning with Southern Region. His future plans include to attend Georgia State University and major in computer science. After college he would like to design his own computer software. While pursuing his goals he plans return to his hometown and giving back to his family and community.  Find out more about the Homecoming Court  in the Eagles Nest Newsletter's November issue.